I can’t believe we’re in May. I’d like to say that April sped by, but the truth is that it didn’t. Not for me, at least. Some days were easier than others. Some days it was all I could do to get through them. I’ve managed to finish two books from March through the end of April. Having to adjust to not just having others in the house, but not being able to do my normal schedule of things has its pros and cons. There are people who really hate change of any kind. The thing is, there is always change. Fighting against it only prolongs the inevitable.

Still, sometimes knowing change is coming and completely out of your hands still doesn’t make it easy to accept or handle. Take the current world pandemic. I hate that this epidemic is killing people and disrupting so many lives. But, there are those who are looking at this on the flip side (And the optimist in me who has always said that everything happens for a reason can’t help but look at both sides) and saying that the air pollution is down in cities, that waters are clearing up all over the world, endangered species are being seen again in places they haven’t been in decades, and the list goes on and on. It makes me think of my favorite meme that someone sent me at the start of all of this. 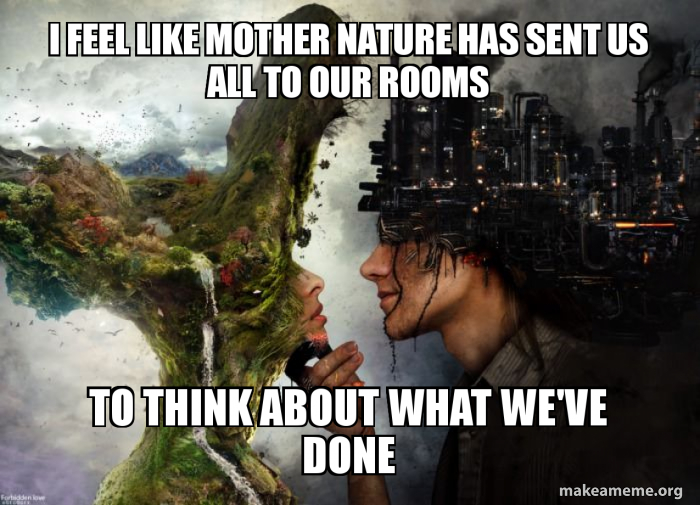 I love to see the earth healing in such a short amount of time. I’d like to think that everyone will ponder what we’ve done and try to come at things with a different approach to keep our planet going. I think it’s wishful thinking, however. Maybe it’s because of how our lives have changed, but I’m spending a lot more time looking at the sky than I usually do. I’ve seen some wickedly beautiful storms, rainbows, cloud formations that have taken my breath away, and the clearest skies I think I’ve ever seen. All from my backyard.

Sitting outside has really become part of my self-care. I love nature, but usually I’m so wrapped up with everything else that I don’t take the time. Then before I know it, it’s 97 degrees outside and I’m roasting. This spring has been something special. The weather has been mild and allowed us to spend a lot of time outside. Some weekends we are outside playing cards the entire day and into the night. When night falls, we turn on the fire pit, sit and talk, and look at the stars. Being outside has changed so much for me. I’ve found that in addition to my long baths, the hour or two I can steal just to be alone, and my mediations, that being outside and getting back to nature has calmed me. It was something my soul needed that I didn’t realize because we all get so caught up in our day-to-day routines that we forget to listen to what our souls are telling us we need. They’ve been shouting at us for so long, but we’ve learned to tune them out. Over the past month, I’ve learned to listen to mine.

I no longer push through doing whatever it is I think I should be – whether its cleaning, washing, working – I take more breaks. I really listen to myself and try to understand what it is I need at any given time. My anxiety levels have reduced significantly. I don’t think I would’ve have done any of this if our world hadn’t changed. Pros and cons. Oddly enough, I wouldn’t call myself an optimist. Rather, I’d say I was a realist. However, looking at things now, I am becoming more of an optimist. Mostly, I think it’s simply because there is so much doom and gloom that in order for me to get through this, I’ve got to put a positive spin on it.

So, find what you need to reach a balance. For some it might be easy. For others, it’ll be hard. But I think you’ll be happier for it.

I’ll close with what I said last month, because I think it’s important enough to say again and again and again. You aren’t alone. You don’t have to carry the weight of everything yourself. You’re stronger than you know, and there are others who are around if you need them. Please, please, take time for yourself.