HIS CURSE TO BEAR

Enigmatic and strong-willed werewolf Kane LaRue realizes the benefits of doing things in a pack. But not this time. He feels responsible for the additional terror a Voodoo priestess has leveled on his family, and has vowed to stop at nothing to end her reign of terror. He almost had Delphine once, and this time, he’s promised himself that he will succeed in wiping her from the face of the earth—or die trying. But when her followers almost destroy him, Kane is forced to accept the help of a stunning and fiercely independent woman who makes Kane re-evaluate what’s important…and listen to his heart.

HER WILL TO SURVIVE

Elise is a survivor, but because of the tragic events of her past, she has chosen to live out her days in the bayou, helping the animals she loves and giving back as much as she can to the community that literally saved her life. When a gorgeous dog she tries to save turns out to be so much more, Elise is compelled to let someone in—and faces things about herself she isn’t entirely comfortable with. But the breathtakingly handsome shifter makes her feel things she hasn’t experienced in ages, and she soon realizes that she needs Kane’s help as much as he needs hers. Together, they are unstoppable, and if they’re lucky, they just might rid the world of the evil that has plagued New Orleans for much too long. 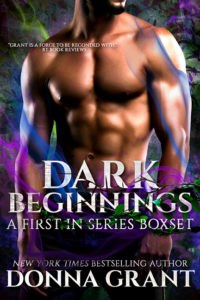 There was nothing more enjoyable than a thunderstorm. Elise leaned a shoulder against the doorway and looked past the screen to the water falling from the eaves of the house.

It wasn’t a soft summer rain, but a storm brought on by the intense heat. The floodgates had been opened, and the ground greedily drank its fill. The clouds were churlish, dark against the bleak, gray sky. Lightning flashed all around, and thunder boomed loudly.

Elise looked out over her back yard to the bayou beyond. The rain fell so hard and fast upon the water that it appeared as if the bayou were alive. The roar of the rain was comforting, the storm exhilarating.

A decidedly nice change from her quiet life.

She looked over her shoulder at the Siamese cat curled up on the back of the sofa, his blue eyes gazing with disdain at the weather. As soon as the cat rushed into the house earlier, Elise had known a storm was headed her way.

While Mr. Darcy liked to spend time outside, he preferred the comfort of being inside at night and anytime there was a storm. The scars on his face and ears proved that he was quite the scrapper—even against the animals of the swamp.

But at least the cat was smart enough to stay far away from the gators.

Elise chuckled and turned her gaze back out to the rain when Mr. Darcy yawned and put a paw over his eyes to sleep. She found her eyes scanning the area for signs of the black dog she’d spotted over the last few weeks. It was huge. At first, she’d thought it a wolf, but there were no wolves in Louisiana.

She’d left a bowl of food out for it, but so far, only the raccoons had enjoyed the meal. The last time she’d seen the dog, he was limping. It had been dusk, so she hadn’t been able to see his wound, but it needed to be cleaned before it got infected—and the beautiful dog became a meal for something else.

While she enjoyed the storm, it was messing with her routine. All her life, she’d been a bit OCD with things. And once she made her daily schedule, she hated when things interfered or prevented her from keeping to it.

After three years in the bayou, she should’ve been used to her perfectly planned days going to shit, but she couldn’t quite manage it. At least she no longer fretted about it—as much.

“One day changed both of our lives, Mr. Darcy,” she said, though the cat wasn’t listening.

Elise had gotten into the habit of talking to the cat, and sometimes, Mr. Darcy would stare at her as if he knew exactly what she said.

It wasn’t often that Elise thought of the day that had altered her life so drastically, but when she did, it was hard to shake off the memories. Or the horror of it all.

Her gaze lowered to the scars on her arms that she kept hidden with long sleeves. They were a constant reminder of how close to death she’d come.

But they couldn’t compare to the scars inside her.

She ran her hand down her arm, feeling the raised remnants through the linen of her shirt. It was silly to keep them hidden. Many in the small community had seen them already. Because they were the ones who’d saved her.

Elise swallowed as she recalled waking up delirious from a fever, to find herself in a place that would’ve sent her running if she’d been able.

Thankfully, her injuries, as well as several pairs of hands, kept her on the table. Elise had drifted in and out of consciousness. One time, she’d opened her eyes to see an old Creole woman tending to one of the many cuts on her body.

Elise had looked into the woman’s black eyes and saw kindness and wisdom. The next time she woke, Elise found herself staring up at dried herbs, bones strung together and clacking with the wind, as well as the jawbones of several various-sized alligators.

Miss Babette used her skills and knowledge of herbal medicine that had been passed down through generations of her family to tend to Elise’s injuries.

It took weeks of convalescing in Babette’s house for Elise to heal. She’d learned to shell peas, often woke to the smell of freshly baked bread, and discovered that the slow pace and quiet of the bayou suited her.

Elise never returned to New Orleans after that. She bought a small house and continued her veterinarian practice in the bayou. Instead of the nice sums of money she used to make, she accepted food and other goods in exchange for her services.

And she found contentment.

It wasn’t the grand life she’d imagined for herself, but it was a good one. She had true friends who cared about her. Instead of having neighbors she rarely saw and never spoke with in a city, those around her visited often, and there was no going to the store without running into someone and sharing a thirty-minute conversation.

It wasn’t just time that moved differently here, the people did, as well. They preferred companionship and waving to each other as you drove down the road to the hustle and bustle of the city, where everyone was chained to their electronics.

Her clientele included cats and dogs but had also expanded to include cattle, horses, goats, chickens, sheep, and pigs, among other animals. Every day was an adventure, but she was safe. And that’s what counted.

Her phone rang, drawing her attention from the storm. She walked to the old rotary phone that hung on the kitchen wall and answered it.

Elise smiled as soon as she heard Ed Perkins’ aged voice on the other end of the line. “It’s best for you not to venture out for our appointment. I don’t like the idea of you driving in this weather.”

There was a pause before he asked, “Do you need anything, girl?”

“Remember, now. Stay indoors. Don’t you go out after some animal until the rain stops. It’s gonna be a bad one. Heed my words.”

She hung up the phone and shook her head. Despite giving her cell phone number out, many of the older folks preferred to call the house.

Mr. Perkins had lost his daughter to a head-on collision fifteen years before, and he often called to check on Elise. His fatherly attention was sweet. Especially since her own father was dead.

Elise walked to the fridge and took out the fresh beans Mrs. Baker had given her and began setting out the ingredients for red beans and rice. It was the perfect meal to cook all day in the Crock-Pot for dinner.

When she finished getting everything ready and into the slow cooker, she turned it on and headed to the corner of her small living room where she’d set up a desk.

After checking her planner, she began making calls to her clients to confirm scheduled appointments. Not a single person wanted to keep theirs. For the next thirty minutes, Elise rescheduled everyone.

It was rare for her to have a day to herself during the week. Well, even on the weekend, if she were honest. The lifestyle everyone led here didn’t go by the usual times in the city. Few made appointments. Most just called or showed up with whatever animal was in need.

But Elise was going to take advantage of the storm. She set her pencil down, closed her laptop, and pushed back from the desk. She grabbed the top book on the stack that kept growing—weekly—and curled up on the sofa with Mr. Darcy lifting his head to see what she was doing.

As soon as she got comfortable, the cat jumped down from his perch and walked in a circle on her stomach three times before he finally laid down with a loud sigh.

Elise opened the book, but before she could read the first word, her gaze was drawn out the screen door again. The lightning flashed, her eyes following the zigzags as her door outlined it.

Mesmerized, she watched the storm until her eyes grew heavy and she began to drift off to sleep. Elise shifted lower onto the couch so her head was on a pillow.

Mr. Darcy butted her hand with his head. She yawned as she scratched the cat, his loud purring making her smile. This was the life. She didn’t need—nor want—anything else.

She was doing what she loved, surrounded by those she cared about and who cared about her. She was no longer trapped in a materialistic society, working long hours while trying to maintain a social life. She no longer went to the gym and worried about her weight or if her stomach was flat enough. She ate what she wanted, when she wanted.

In many ways, she was richer now than she’d ever been in the city.

But it had come at a price.