When time began there were creatures so vast, so powerful that they ruled all.

Every size, every shade of the magnificent beasts roamed the Earth. They ruled the skies, the land, and the water.

In each faction of dragons was born one with power greater than the others, but also magic. Not just any magic - dragon magic, the most powerful and formidable magic ever to touch the earth. It was these special dragons that became Kings of their colors.

Thousands of years passed, and then one day humans were created. An unknown force took each Dragon King and gave him the ability to shift from dragon to human form and back to dragon at will. It was done to guarantee there was peace between dragons and humans.

And for a time there was.

The Kings kept the humans safe, and in the process safeguarded that the dragons were protected.

Like all things, that serenity was shattered when humans began to hunt the dragons.

Chaos reigned as each King struggled to learn why the humans were killing dragons. It didn’t take long to discover it was the treachery of none other than a woman – a woman who had vowed to love one of the Dragon Kings, but instead betrayed him.

The War couldn’t be avoided. Thousands of humans and hundreds of dragons died. Whatever peace had been achieved was shattered with one simple betrayal.

The Kings with their vast dragon magic had but one choice – to send their beloved dragons to another realm. With the dragons gone, the Kings went into hiding.

No matter how much the humans tried to hunt them, they couldn’t be killed. For few know that only a Dragon King can kill another Dragon King.

Afraid of another woman deceiving his Kings, Constantine, the King of Kings, used his magic to prevent any of his Kings from ever caring for – or falling in love with – a woman.

So they lived millennia after millennia, through wars, industry booms, and emerging technology. They’ve hidden in plain sight, giving the world the best Scotch whisky to ever grace the land – Dreagan.

These are the stories of destiny and desire, magic and mystery, warriors and lovers. These are the forbidden cravings of the Dark Kings… Q. Do the books in the series have to be read in order?

A. They are all stand-alone, however reading them in order will give you a better flavor of the series. If you want to read in order, the series installments are:

The Series will continue with more books…

Q. What is planned in the Dark Kings Series?

A. The first three stories are an introduction into the Dark Kings world and who the men are. The first three stories are novellas, with full length books following. In these books you will get to meet each King, who will have their own story. There is a larger story arc through the series, however, and with each book, you learn a little bit more.

Q. How many books will there be in the series?

A. I can’t answer that because it changes with each book. I’ve set it up so that the series can continue – or end – whenever it needs to.

Q. Where can I find more information about the series?

A. Be sure to check the individual book pages for excerpts and information on the Kings.

Q. Where can I buy the books?

A. The first three stories were released as eNovellas only, and are now available in one print/ebook/audio compilation DARK HEAT. The rest of the books will be mass market format, and you should be able to find them in any book store or online.

Q. How are the Dark Kings connected to the Dark Sword/Dark Warriors series?

Q. Are the Dragon Kigns connected to any other series?

A.As a matter of fact, they are – the Reapers. The Dark World expands to include a interconnected series involving the Fae. You’ll get to live in their world – both Light and Dark Fae. 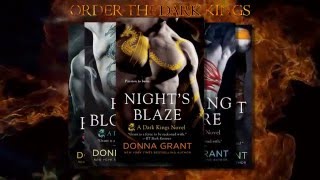