Most would give all they had to be raised in the Realm of the Fae. I had no choice. I was too young to remember anything of my own realm, save for snatches of memories that could be no more than my imagination. But if the Fae hadn’t found me wandering between realms after mine was destroyed, I would be dead. It was the Fae who raised me and trained me in weaponry and battle until I became a warrior to be feared. When the same evil that destroyed my realm threatened Earth and the Fae, I was the first to volunteer for the Shields.

Shannon has been transported back in time from Chicago to 1244 England because the evil knows what she is—one of the Chosen. It plans to kill Shannon, but I won’t allow that. My duty is to protect her at all costs.

“It is a sensuous and fast paced novel that hooked this reader immediately to the story, characters and series.”
– Laurel, The Mystic Castle

“…Shannon’s sexy protectors are mysterious and tempting, and the romance is sensual. A Dark Seduction is an interesting and action filled story. I look forward to reading the next in this series.”
– Nanette, Joyfully Reviewed

4 Hearts! “Ms. Grant continues her series with strong characterizations and imagery that brings the reader into the story from start to finish.”
– Samantha Ann, Night Owl Romance 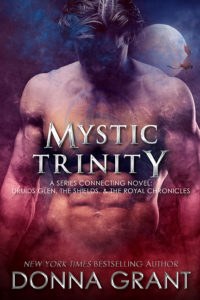 Shannon O’Malley seethed. Never in her life had she ever felt so alone – or weak.

Her chest still heaved from her frantic escape from the upstairs window. She had nearly made it too, but then Benton had suddenly appeared to stop her.

Benton Ducre. She hated the name as much as she hated the man. He held her prisoner, forcing her to work, and always keeping a close eye on her. Even at night, she had a guard outside her room.

The man was becoming a serious pain in her ass.

Why it was so important that she stay within reach at all times, she had no idea. All she knew was that one minute she had been minding her own business driving down the Chicago streets and then the next, she was standing in thirteenth century England.

Shannon jerked at the voice behind her. Her eyes stung with unshed tears, her face throbbed where Benton’s meaty fist had slammed into her, and her pride was bruised from not having made her escape after careful planning for two weeks.

She was hanging onto her sanity by a thin thread that had already begun to unravel. If she ever made it back to her time she was going to need serious psychological help.

With shaky hands, she reached for the mug of ale Benton had filled. Just as her hand closed around the thick mug, Benton’s closed around hers. His dark, hooded eyes glared at her. She stared at his square face, flat nose, and protruding brow, and all she wanted to do was run. He was a mobster.

Oh, they might not be in Chicago, Hell, they weren’t even in the twenty-first century, but he was a mobster.

“If you ever try that again…” His gravely voice trailed off.

She looked into his beady black eyes and shivered. He didn’t have to finish the threat. She knew exactly what would happen to her.

With a jerk, she wrenched her hand out of his, sloshing ale over the both of them. Her legs grew steadier with each step she took away from the bar, but the rage only increased. She would make Benton and his cronies pay if it was the last thing she did.

“About bloody time,” the man said when she delivered his ale.

She swallowed the bile that rose upon noticing his blackened teeth and greasy hair. It was just one of the many reasons she hated this hellhole she was in. She wanted to return to her century where people bathed, brushed their teeth, and maintained general hygiene.

As she turned away, he grabbed her hand. What was it with everyone grabbing her? She wanted to scream. Didn’t anyone follow a personal space rule in this century?

“A nice set of tits ye have there,” Greasy said as he hauled her onto his lap. “With those tits in me face, I could forgive ye anything.”

Shannon guessed that most women would have been glad to receive such a compliment, but all she wanted to do was elbow him in the mouth. She tried to squirm out of his lap, yet he held on like a dog with a bone.

He laughed in her ear, his vile breath choking her. “Ah, ye like the feel of me pecker against yer backside, aye?”

Shannon stilled instantly. She glanced at Benton, and there must have been something on her face to alert him that she was fast loosing control because he hurried around the counter and pulled her out of Greasy’s lap.

“Enough, Thatcher. You’re wife is waiting for you,” Benton said.

She watched as the man’s smiled vanished at having her yanked from his lap. She wondered if there might be a fight, giving her another chance at escape.

“Ye’ve never stopped us before, Benton,” Greasy said as he slowly stood.

Benton glared at the man until Greasy sank back into his chair. “This is my tavern, Thatcher. What I say goes. If you don’t like it, leave.”

Shannon started to back toward the door when Benton turned his black eyes on her as if he knew exactly what she was thinking. She hurried away, not caring what else Benton had to say to the man.

A woman could only take so much of the abuse every day without any answers to her questions before she turned like a caged animal and began attacking.

Her feet moved her to the back room under the stairway. It was a storeroom of sorts, but it was her room. No sooner had she closed the door behind her than Benton yanked it open and followed her in.

“Did I not hit you hard enough, wench?”

He growled and stepped towards her. “Answer me.”

“What do you want from me?”

Shannon began to laugh. It was either that or cry, and crying in front of Benton the Beast was unthinkable.

His black eyes narrowed on her. “And just what do you find so humorous?”

“You,” she said between laughs that now had her doubled over.

Apparently Benton didn’t find anything amusing because he hauled her up by her hair, pulling off the little white cap he made her wear and scattering the pins that kept her hair in place.

She yelped and grabbed hold of his hand to stop him from pulling any harder.

“You’ll act like a proper bar wench. You’ll flirt with the men, let them fondle you and even fondle them yourself,” he spat in her face. “Do you understand?”

She shook her head and blinked away tears. “Tell me why you weren’t surprised to find me standing in the middle of the field.”

He flung her away and strode to the door. “Keep those questions to yourself, wench. You’ll find out the answers soon enough.”

Shannon waited until the door closed behind him before she rose up on an elbow and swiped away the stray tear that had managed to escape.

Slowly, she climbed to her feet and found the poor excuse for a mirror on the wall. Her cheek hurt so badly that she could hardly move her mouth. Even in the dingy mirror, she could see the bruise forming on her right cheekbone.

With a sigh, she pushed her hair away from her face. Pins littered the floor, and she stared at them for a moment. Maybe if she refused to bathe, brush her hair or change her clothes Benton would no longer make her work the tavern floor.

Without another thought to her wild, tangled hair, Shannon walked out of the small room.

Cole spotted her instantly. She moved with the grace of a caged animal, one that was ready to strike at any moment. Her honey brown eyes flashed with anger and resentment wherever they landed.

She was being kept against her will.

As much as it was Cole’s nature to help the less fortunate and weak, he knew he couldn’t aid her. Not yet. Once they had vanquished the creature, then he could return and set her free.

He had seated himself in the back corner where the shadows kept most of him hidden. There he could watch everyone and listen as the men talked.

It became harder and harder though as the woman kept drawing his attention. Each time she went to a table to deliver drinks or food, he was given a glorious view of her ample breasts, and despite the disarray of her brunette locks scattered around her, she looked positively sinful.

The kind of sinful that had him thinking of bed sport. All night bed sport.

When his mind turned to ways he wanted to claim her, he had to forcibly turn it back to the mission.

“Can I get you anything?”

Cole cursed silently at not noticing her before she walked to his table. He had been so deep in thought about forgetting her that he hadn’t been paying attention.

With everything hinging on the fact that everyone needed to believe him a drunk, he raised his eyes, a goofy grin on his face as he pretended not to be able to focus on her.

Even acting drunk he couldn’t help but notice her oval face, full lips, pert nose, and gently arching brows over eyes that slanted upwards at the corners. She was a beauty, and one he wanted desperately in his bed.

“Hold still, and I might answer you,” he said, making sure to slur his words.

“You’re drunk,” she said, not hiding the loathing from her voice.

Her accent was like nothing he had encountered before. She wasn’t from England, Scotland, or France to be sure.

“Aye, darlin’, I am. A man has that right every once in awhile,” he drawled and took a drink, careful to make sure some spilled. “I’m nearly empty,” he said as he smiled up at her and set the mug down. “I’d like another.”

She put her hand on her hip and stared at him. “You should probably get home to your wife while you can still stand.”

Cole laughed. “Ah, but I don’t have a wife. I’m just drinking for the hell of it.”

Her face softened, and her full lips pulled as if in a smile. She turned to glance over her shoulder, and that’s when he saw the bruise. The entire right side of her face was turning a nasty shade of purple.

He clenched his left hand under the table and promised himself the man would pay for hitting her. It was the lowest kind of man that would strike a woman or child.

She shook her head but went to the bar for his ale. While she had her back turned, he hastily emptied his ale in the corner.